Its been years since I visited Mt Kenya and it feels like a lifetime ago. I am feeling a sort of longing for the land of the giant lobelia and vertical bog of Mt Kenya and also for all the good times and wonderful adventures I had throughout Kenya. I miss it.

As you can see, its an incredibly beautiful environment, and glaciers so close to the equator are a very special case. These glaciers are projected to disappear by about 2030, so

Well, the summary of the research (from our research group and a lot of earlier research by Stefan Hastenrath and his colleagues) shows that climate change is impacting the glaciers and, in the case of Mt Kenya, this is likely to be due to both warming and drying of conditions at the peak of Mt Kenya, such that the glaciers are melting faster and at the same time receiving less snow.

The drying of Mt Kenya is a signal found across East Africa – at the mountains like Mt Kenya and Kilimanjaro and in the lowlands. Precipitation amounts become more variable and generally less, and wet seasons become shorter. The drying is caused by change in sea surface temperature patterns over the Indian Ocean that control the moisture transport towards East Africa. This change in sea surface pattern was found to be a consequence of global warming.

More importantly than its direct influence on ice melt, the warming signal on Mt Kenya leads to a higher proportion of rainfall instead of snowfall. This means a lack of mass input to the glacier and a decrease in albedo, which causes a higher absorption of solar radiation and thus increased melt.

Research findings suggest that the glaciers on Mt Kenya formed under climate conditions that must have differed substantially to those of recent decades, and as such the glaciers will not survive. Indeed the modern day conditions at the summit indicate temperatures only just below freezing, so in a general sense, this location is not currently very conducive to glacier formation or survival.

The especially rapid rate of recent retreat may also be partly a feedback caused by glacier shrinkage thus far leaving only very small ice bodies on Mt Kenya.  Larger glaciers can form their own cooler microclimate, which reduces ice melting, and also a large glacier is also less vulnerable to ice melt due to heat emitted from the surrounding exposed rocks when they are warmed by the sun, as the glacier margin is small relative to its total volume. Small glaciers do not create a very strong microclimate and the glacier margins are large compared to their total volume so melting at the glacier edges can play an increasingly important part of glacier melt as the glacier shrinks.

The key publications from our research group on changes of Lewis glacier are:

The key publication from our research group on the climate control is:

Posted in uncategorized | Comments Off on Glaciers on Mt Kenya

Glaciers of the Arid Andes

A team of us, led by Christophe Kinnard, just published a paper synthesising a bunch of work done on a small glacier in the Arid Andes.

Glaciers in the dry Chilean Andes provide important ecological services, yet their mass balance response to past and ongoing climate change is not that well studied. The new paper uses glaciological, geodetic, and ice core observations to examine recent (2002–2015), historical (1955–2005), and past (<1900) mass balance history of Guanaco Glacier (29.34°S, >5000 m). The work was done by CEAZA and its partners, over a number of years, including those when I worked at CEAZA leading the glacier research group, which is now led by Shelley MacDonell.

My contribution to writing this paper was lightweight, but its great to see it out there, especially as I was involved in the mass balance work and the ice coring project of the Guanaco Glacier.

The main findings are summarised in the abstract:

Here is a list of other works mostly produced by CEAZA and its partners on these small arid zone glaciers and their surroundings:

Posted in uncategorized | Comments Off on Glaciers of the Arid Andes

Its one of my favourite slogans for change.

And not just because it sounds nice, but because it seems truly necessary to me. There is no solution to our ecological and well being crisis within our current mindset. In fact I find this exciting. Consider it a challenge, consider yourself having the possibility to shape a new future, downscale, readjust, take care of your own resilience and that of your community, care deeply for your local environment, and by doing so help us all.

I can strongly recommend listening to Nate Hargan talk about out how energy underpins all of our life options and societal constraints, as we operate on this planet as an energy greedy super organism. He explains how we have run up a massive debt in energy via our fossil fuel consumption during this ‘carbon pulse’ that we live in, and how this is actually an emergent behaviour of our humanity. He advocates for preparing ourselves for ‘The Great Simplification’ that must come, he believes within the coming decade. So if you want to spend a valuable hour then watch this:

As a civilisation we need to be brave enough to instigate system change to protect our environment and secure a future for all the life on our planet. We live on a limited resource planet but right now our lifestyles ignore that fact. We need a human society that reflects our existence as being from, and part of, nature not pitched against it. All our human-made systems are ours to change so lets change for the better and win our future quality of life back.

Check out: Institute for the Study of Energy and Our Future for more on the central role understanding energy plays in understanding how we got here and how to move forward, and Reality 101 to watch a condensed version of Nate Hagens university course.

Posted in uncategorized | Comments Off on System change not climate change

JIRP presence at the AGU meeting

Well, as part of limiting my travel I don’t usually go to the American Geophysical Union Annual Fall Meeting, but its always worth spending a little slice of time seeing what people are talking about in one of the biggest (maybe it is the biggest?) earth sciences meeting world-wide. Plus this year AGU is celebrating their 100 year anniversary, so there are some additional events and features.

The Juneau Icefield Research Program (JIRP), often encourages students to present their summer research projects at AGU. For example, in 2018 JIRP students/staff/teachers were involved in presenting 3 posters about the ice field:

This year, content from core JIRP staff and scientists is in the field of diversity and the exciting question of what the Taku glacier will do next:

Recent changes at the Taku Glacier terminus (below in 2019) can be seen in a comparison here. 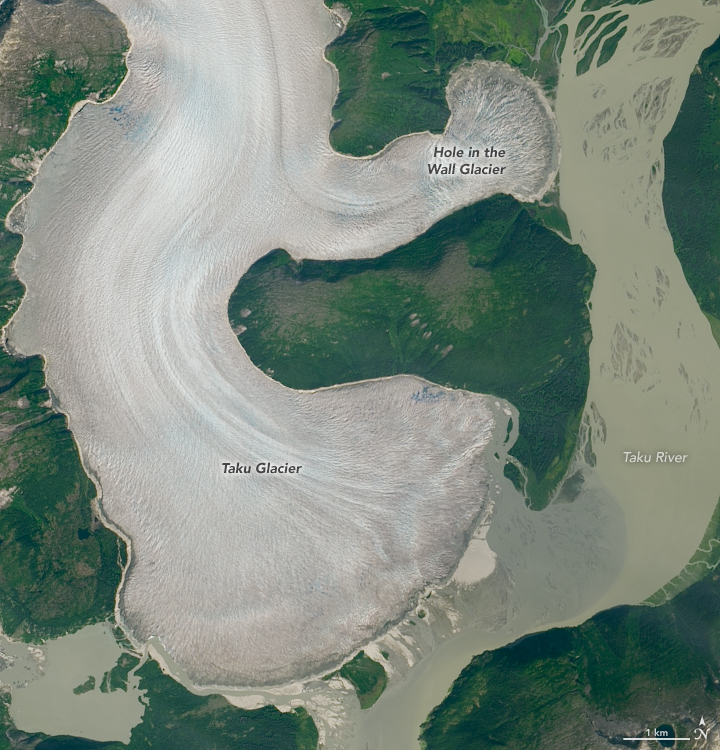 The 2019 student cohort present their research project findings in team or individual posters:

And our research partners, to whom we provide logistical support present their findings in several presentations, a couple of which I have included here:

Apologies if I missed something major, but theres a lot to look through – please let me know if you have an abstract that should be linked here because its related to your activities with JIRP!

Jun Uetake (@JunUetake) of Colorado State University, has in the recent past sampled the glacier microbiology on Mt Kenya in order to compare it with the glacier microbiology in the Rwenzori. They found samples were in fact similar to microbial communities from glaciers in China and Svalbard, which is interesting in terms of global atmospheric transport of microbial communities.

Anyway while doing his research, he took hourly images of the glacier surface from near the terminus, between September 2015 and September 2016, which actually captured the splitting of the glacier into two, a process that began earlier in 2013/14. Jun sent me the time-lapse movie ages ago, but the camera angle changes party through and so just today I tried to align them best I could and make a comparison from 2015-09-21 to 2016-09-13:

Some of Juns papers on microbiology:

Posted in uncategorized | Comments Off on Timelapse images of Lewis glacier